Last week, consumer groups in the EU and US met in Washington DC for the 17th TACD Annual Meeting. In this guest blog, Susan Grant, Director of Consumer Protection and Privacy, Consumer Federation of America and member of the TACD Steering Committee, shares her impressions.

Though consumer advocates have made much progress in advancing our perspectives on trade, we still have more to do. This became clear as we listened to Ambassador Stuart Eizenstat’s remarks during the final session of this year’s TACD meeting on “Re-thinking trade policies: a consumer agenda for trade”. Ambassador Eizenstat, now at a law firm and President Emeritus of the Trans-Atlantic Business Council, has had a distinguished career in U.S. government as an Ambassador to the EU and serving in many other positions, including Undersecretary of State for Economic, Business and Agricultural Affairs during the Clinton Administration. In that capacity, he supported the creation of the TACD, for which we are appreciative.

But, claiming to be the “father” of the TACD, he angrily scolded us as if we were naughty children. He said that it was inexcusable that the TACD and major consumer organisations such as mine were anti-trade and accused us of being in the same camp as President Trump on trade issues. This naturally elicited cries of astonishment from the audience. Though Ambassador Eizenstat said that he had read our papers on trade, apparently he did not understand them. We have nev 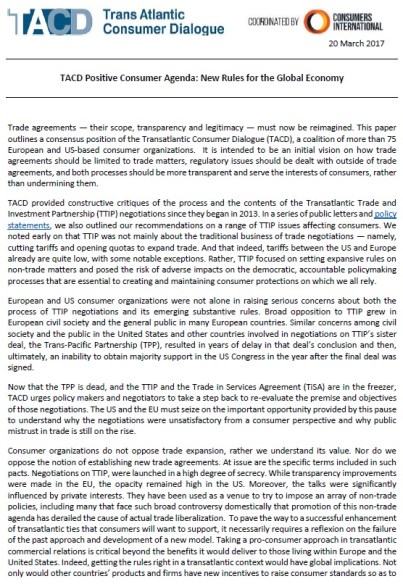 er said that we opposed trade agreements. In the TACD’s many letters and detailed policy statements on the Transatlantic Trade and Investment Partnership (TTIP), we have made concrete and constructive suggestions for how to improve both the process and the outcome of the negotiations.

Ambassador Eizenstat also rolled out the tired claim that trade agreements are good for consumers because they will result in more choices and lower prices. Putting aside the question of whether that’s always true, the point is that those are not consumers’ only, or even main concerns. For instance, as studies have shown, they highly value their privacy and don’t necessarily want to give it up in exchange for lower prices or “free services.” We were, and remain, very concerned that the provisions in TTIP concerning data flows might “trump,” if I may use that word, EU data protections.

What we do oppose are trade agreements that would lower or freeze consumer protections, prevent consumers from exercising their rights, tie the hands of regulators and legislators, and give companies special privileges to challenge consumer protections that impact their bottom lines (at least Ambassador Eizenstat seemed willing to throw out ISDS and similar mechanisms). The TACD has a new vision for how the global economy can benefit consumers. We hope that Ambassador Eizenstat will embrace it and help us promote it to policy makers and businesses.

The guest blog has also been published on the BEUC blog, the Consumer Corner.